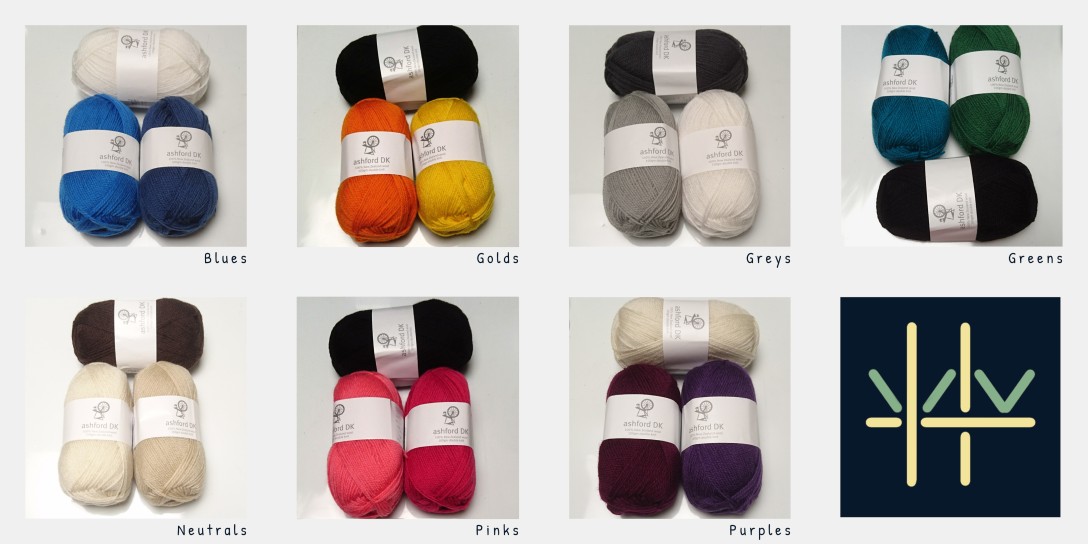 I had some fun this week picking out colour combinations for the upcoming Houndstooth weaving workshops. It’s a very striking, classic colour pattern and I love how it looks so effective and impressive while being really very simple.

The trick is getting a good amount of contrast between your colours (and it applies to other plainweave colour patterns, like log cabin). For maximum effect you want them to contrast in value not just in hue – that is there should be a strong difference in lightness/darkness. If you’re working with bright, bold colours it can sometimes be tricky to work out whether there is much difference in value between them, so the easy way to check is to take a photo and remove the colour/convert it to greyscale. A tip for that – if you’re using an app with ‘filters’ it may not do a straight conversion to greyscale, there may be other effects and changes built into the filter. I find the easiest option is to manually change the saturation or vibrancy setting to remove all the colour so that I know I haven’t changed anything else.

In the first photo (figure 1), the bright pinks stand out against the other greys and white yarn. You might think that either pink will contrast strongly against any of the neutral tones.

However, when the colour is removed from the image…

You can see that the light grey (top left) and white (top right) are very similar in value to the pinks, and only the dark grey (centre top) and chocolate (bottom left) give a strong contrast.

This is why I choose black to combine with the pinks and golds – for maximum contrast!

I’ve been doing some reading on different types of houndstooth. Using rigid heddle looms in my workshops, the pattern we’re weaving is a two shaft version, and I found that this is also known as puppytooth as it is a smaller pattern than the standard four shaft twill houndstooth.

I also found this very beguiling paper from the Eindhoven University of Technology which examined different variations of Houndstooth (or Pied de poule in French [foot of hen]) with increasing levels of complexity. Now, I admit that I did not follow most of the maths… But I did love that in Dutch the two shaft version is called Molenwiek which means ‘windmill wing’. So there’s some more weaving terminology to add to my vocabluary!

View all posts by HappywattleHandweaving